Lionel Messi will win the Ballon D’Or for the fifth time.

While the Real Madrid star is definitely in the running to win a fourth, Messi enjoys a clear advantage given that his performance took Barca to their second treble.

In speaking on the Jonathan Ross show, he said “You win competitions, you win the Champions League, you win the league in terms of individual. I did probably the best season of my career, which is good and I was the highest scorer in Europe, [but] it’s all about votes, it’s difficult, and to be honest, I’m not very worried about that because as I said many times, I never thought I’d win three times, to be honest.” 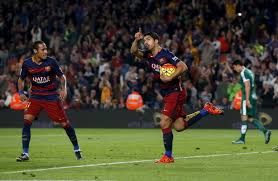 Messi finished the season with a total of 58 goals that helped Barca win La Liga, Copa Del Rey and the Champions League too.

As for his relationship with Messi, he said that they share a normal relationship even if they have shared the FIFA stage for eight years now. He also pointed out that noone in the past has been able to achieve this either.

What he also pointed out what that even though they do not visit each other’s homes, they still respect each other a lot.

It’s clear that by this rare showing of humility, he has conceded the 2015 Ballon D’Or to Lionel Messi.

The reigning World Player of the Year also revealed his private jet costing 19 million Euros at the same time.